All The Must-Know Learnings From CFA Level II 2012 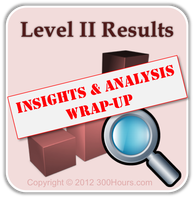 After the multiple posts on Level I and Level II analyses, hopefully you’re not bleeding analytics from the ears. One more post on Level II, summarizing the key points behind all the data, and normal life will resume. Promise.

In the Level I summary we looked at the top 5 key learnings from all the analytics we carried out on the Analyze Results data. A similar format is used here, for the Level II summary.

As per the Level I analysis summary, the entire analyzed sample is illustrated below. The length of the band represents the minimum and maximum range of a particular candidate’s score. Red bands represent failed candidates, and green bands represent candidates who passed. The Minimum Passing Score (MPS) is a range this time (wasn’t able to narrow it down enough), illustrated by the blue range. 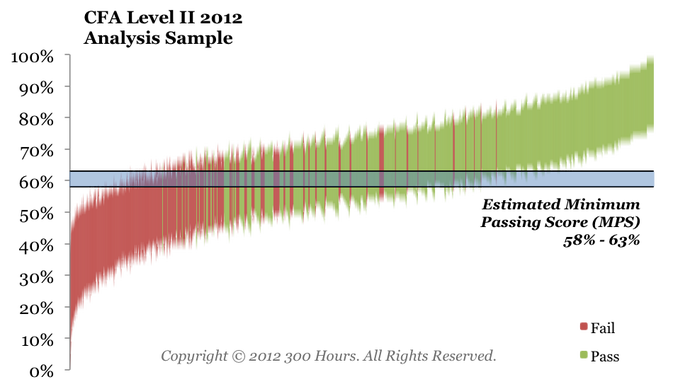 FRA’s a bitch, and it’s not just you. Financial Reporting & Analysis has been the traditional weak point for most Level II candidates. If you think FRA’s a pain in the ass as well, you’re definitely not alone. There is a performance improvement in passing candidates compared to failed ones, but the difference is not that significant compared to others. Everyone finds it tough.

Look for arbitrage in Equity Investments, Corp Finance and Derivatives. The other topic heavyweight, Equity Investments, does show a large performance improvement between passing and failed candidates. Corporate Finance and Derivatives also show similar patterns. This may indicate that these subjects are not difficult to master compared to, say, FRA, and the passing difference is that candidates took the time to concentrate on these. It could pay to give special attention to these topics.

Focus on Ethics, but don’t go too crazy. Ethics observes one of the least amounts of performance improvement across passing and failing. Candidates in general take Ethics equally seriously, no doubt at least partially due to the ethics adjustment advice given to candidates. This topic also has been covered and emphasized here in the past. However, the effect of ethics adjustment can be overestimated. As the ethics adjustment only helps borderline cases, this implies that it can be negated with a single additional mistake elsewhere. For your prep, it would be useful to realize the plateauing point for Ethics – don’t focus too much on Ethics at the expense of other topics.

The MPS for CFA Level II 2012 is between 58% and 63%. The MPS range for Level II is lower than Level I. However, please don’t use this data to aim for a lower score threshold in your Level II prep – always aim for 70%. Anything lower than that – you really should step it up a notch.

Like this post? Get our analysis report for all our analytics for all levels, or view our 10 Commandments for CFA Level II!