5 Shocking Examples of Cheating in the CFA Exams 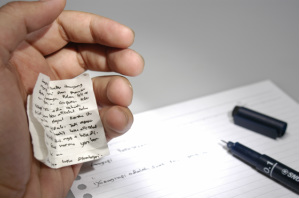 Recently I noticed that although there are tons of articles covering the CFA qualification and how to prepare for the studying process, I noticed how few articles touch on cheating in the CFA exams. Actually, I found none whatsoever, just a few links to some tired candidates wondering whether cheating would happen during the exam day.

I assure you, it most definitely does happen. Cheating to exams are like weeds to a garden – it’s not a question of whether it will happen, but when. In the past few years I’ve interviewed candidates and proctors on exam-day experiences and along the way have amassed a fair number of 100% true-life CFA cheating cases – I share the more interesting ones below.

But first, I feel I have to attach a warning:

Cheating is obviously dishonest and defeats the purpose of what the CFA charter is about. If you cheat at one level and get away with it, you won’t be passing the next level on your own as you would have needed to master the previous level anyway. Also, if you’re using this qualification professionally what use is it if you obtained it without the accompanying knowledge? Finally (perhaps most importantly), you will get busted. Every one of the below did.

#1: Sweets Are Not What They Seem


Rick*, a proctor for 3 years running, introduced me to what apparently was one of the most common cheating methods not just in the CFA exams, but exams in general – replacing the original wrappers and printed material of anything you were allowed to bring into the exam with custom-printed material that were identical in design, but contained exam notes instead of the usual nutritional information. In the CFA this included things like gum wrappers and candy wrappers. Another similar ruse was to wrap folded notes with the sticks of gum themselves, and read them when you unwrap your stick of gum. To dispose of the evidence, one simply chews the gum and wraps the note and wrapper into one sticky mess.

I’m not really impressed by the effectiveness of this method. It’s not particularly bulletproof as CFA proctors tend to take out anything that has printed material (although sometimes they allow gum and sweet wrappers). Also, hassle of extreme Photoshopping aside, how beneficial would this be, seriously? If you were diligent enough to print tiny bits of information onto tiny bits of sweet wrappers, surely you can memorize them for the 6-odd hours of the exam.

Gina*, a CFA candidate, has a particularly innovative method using an iPod or any music player. She first isolated all her notes for the most impactful and difficult-to-memorize material. Next, she recorded herself reading all of these notes and formulae aloud and saved this into her iPod in 15 min tracks. On the exam day, she had the full ‘playlist’ of exam notes saved on her iPod playing and set on repeat, and this was jammed into her pocket (she had a Nano so this didn’t bulge at all). She then fed a pair of earphones through a hole in her pocket, underneath her jeans and shirt and up her left long sleeve, tucking one earphone to a band on her wrist. The earphone remote control would be approximately at her elbow underneath the sleeve.

To listen to her notes, Gina simply rested her temple on her left hand, allowing the earphone to be within hearing distance. To change ‘tracks’, she would simply operate the remote control at her left elbow using her right hand. In the context of an exam this pose looks completely natural – exactly like you were stopping for a moment to think hard.

Would it be worth it? Retrospectively, Gina doesn’t think so. “To prepare this you need to read the material quite a bit so by exam day I found myself knowing what I would be hearing anyway, so the risk wasn’t worth it in the end. Plus worrying about whether I was going to get caught stressed me out a lot and that didn’t help with the rest of the exam.”

Toilets to share and compare. This is best exemplified by a case involving two ladies in an exam two years ago. To compare answers one of them would write her answers on a piece of paper while in the toilet and hide it in the toilet tank. To signal which toilet stall was the right one she would leave the toilet seat up, which made it stand out against all the others who would have their toilet seat down. The other conspirator would next go into the toilet, find the right stall and would be able to check, reply and so on. Although elaborate, how much helpful information can you glean from this is quite beyond me.

Toilets to hide your notes. The toilet roll and toilet roll holder are very popular for this – cases have included rolling up notes deep into the toilet roll between the toilet paper sheets, writing your notes on the sheets themselves on a pre-prepared toilet roll and swapping it with the exam center’s roll before the exam, and so on. One candidate even took out the entire toilet roll holder and tucked notes into the recess behind it – he got busted as he made some noise trying to get it out. He wasn’t making a huge racket, mind you, but enough for the proctor to get suspicious enough to rap on the door – at which point he completely lost it.

Toilets to do some extra in-exam studying. Another popular trick is to hide notes on yourself – the list of places for this that I’ve heard is endless, some less savory than others – and use the toilet as a secure space to extract out your notes and read them. To get rid of them, just chuck in toilet and flush.

A more recent case – and kudos really for the effort – involved a candidate convincing a friend to pose as a fake proctor during the exams. The theory here is to ensure his fake-proctor friend would then be available in the exam hall to ‘give preferential treatment’, so to speak. To prepare for this, the friend stored prepared notes in his trousers and showed up on exam day at 6 in the morning in full proctor gear – fluorescent safety jacket, black uniform, everything.

Only problem was, as proctor shifts and exam-time locations are strictly allocated beforehand, recorded and checked, he stuck out a mile when trying to blend into the horde of proctors. Fake proctor was duly busted and said candidate busted along a few minutes later. This case, however, apparently caused a policy addition to CFA Institute proctor procedures. Proctors are now also required to bring valid international passports for identity verification on exam day. So this method, although colorful and daring, most definitely does not work.

#5: Just Doing This to Help Out

A slightly separate category in all this is cheating to help other candidates who are taking the exam in a different time zone later. Probably not out of the kindness of their hearts – I hear that this information fetches quite a bit of money. This kind of cheating typically involves an impressive array of gadgetry:

James-Bond-esque camera in chest, or pen scanner. I suppose there is an endless array of similar stuff like this available, but the two cases I was told of involved a pinhole camera in a locket underneath a shirt, and another case with a camera in a pen. The wily candidate would then sneakily either lift the exam paper to be ‘seen’ by the camera in the locket, or in the case of the pen camera, simply move the pen over the exam paper. Both actions, as you can imagine, are not quite natural looking. But both cases has nothing on the guy who showed up with…

A full hand scanner, and either brass cojones or lack of brains. To be fair, it was a small hand scanner. I didn’t get much details on this one, and it’s a shame, because from what I heard this guy simply walked in with this and during the exam proceeded to merrily scan each page using his hand scanner. Sheer entertainment, I tell you.

To reiterate, yes, cheating takes place in the CFA exams, just like any other exam. No: I am not advocating it. It seems a pointless hassle that is unlikely to make much difference to your mark, but may get you seriously black marked.