Finished Your CFA Exam Recently? How Did You Celebrate? 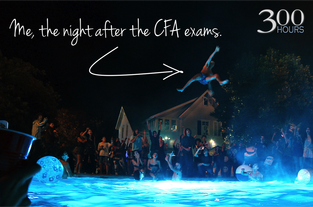 Post-exam plans are often a much fantasized aspect when prepping for the CFA exams.

A missed party. Not going out with your regular gang. Passing on on a movie or a game. Every time this happens, you might think, “After the CFA exams. AFTER it, I’m gonna party so hard they won’t know what hit them!”

However, during the 5-6 months of CFA prep, you may have been deferring the crap out of your gratifications. Hence for your first CFA night, many candidates may have some pretty epic plans.

Conversely, sometimes you can be so exhausted that no matter how grandoise and well-thought-out your plans were, exhaustion takes its toll. Sometimes all you managed was a feeble croak before you collapsed thankfully onto your bed for some quality sleep.

Looking back, my nights out after the CFA exams were quite varied across the years. Here are my recollections.

CFA Level I – KO-ed
As it was my first time, I was relatively unprepared for the mental ordeal that was CFA exam day. I was totally spent by the time I trudged out of the exam hall – I barely dragged my sorry ass home, never mind any kind of partying I planned for the night. I didn’t even get good sleep that night – my eyes were burning and my mind was quite restless. It took me a few days to readjust back to normal CFA-free life.

1st CFA Level II – The Night Out
As you may know, I didn’t pass my CFA Level II the first time around. This time, I took the exam with a largish group of my friends, so we trooped to Canary Wharf and proceeded to imbibe a truly prodigious volume of brain-killing alcohol. There was table-top dancing at some point, and I remember hurling beer bottles around and yelling at terrified tourists.

2nd CFA Level II – The Couch Potato
Sobered up by my previous CFA failure, I took a quieter approach. I did exactly as planned – order in a large pizza with extra cheese and garlic sauce, plopped myself in front of the TV and slobbed away happily. Bed at an earlyish hour, and pretty good sleep if I remember correctly.

CFA Level III – The Civilized Night Out
I was keen to replicate my Couch Potato approach for Level II, but my expanding waist (no thanks to the CFA prep process itself) suggested that I give pizza a miss this time. I opted to have a nice dinner out with friends instead. Wine, food, and drinks afterwards. Civilized, enjoyable and sociable.

How did you, or how are you planning to spend your first night after the exam? Vote below so we can get a good idea of how wild people are, or are planning to be!

If you’ve planned or done something particularly special, let us know in the comments below!

3 thoughts on “Finished Your CFA Exam Recently? How Did You Celebrate?”