Back in May 2013, I wrote this post for 300 Hours entitled “CFA = Children and Family Abandoned.” At the time, I had two young children (I now have three) and I was bemoaning both that I did not spend as much time with my family as I would have preferred as well as that I was distracted when I did. I was preparing to write the Level III exam and, like many candidates, I devoted my weekends from January to the first Saturday in June to studying. Additionally, I often stayed late after work because it was easier to study in an empty office than a house overrun with children. ​

​My life outside work and studying didn’t cease entirely, but, like every other CFA candidate, I made choices about how I used my time, and choices have consequences.

Unfortunately, I failed my first attempt at Level III in 2013. This came as a shock, because I’d passed both Level I and II on my first attempt and felt fairly comfortable doing so. I took a few months to grieve that result, but it was never a question of whether I would try again in 2014. While I had failed, my score was respectable (Band 8) and I was certain that I’d pass on my second attempt at Level III, which is a very different experience than Levels I and II due to the written answer structure of the morning session. Moreover, it had been five years since I’d passed Level II because I had put the CFA pursuit on hold to focus on activities such as starting a family.

In January 2014, I dusted off my CFA books and resumed my studies. The only difference from 2013 was that I was determined not to take anything for granted and if that meant devoting even more time to preparing, so be it. I made more sacrifices and I justified those choices in my own mind. I once read a book about climbers who died on Mt. Everest after going out in conditions that they knew would put them in severe danger. At the time I wondered how anyone could be so reckless, but was I any different in this case? I couldn’t bear the thought of walking away empty-handed after having sacrificed so much and gotten so close to something I wanted so badly.

Unfortunately, I also failed my second attempt at Level III in 2014. It was more frustrating than 2013 because I’d put in all that additional effort and come away with the same result that I would have gotten if I hadn’t studied a single hour. I’d like to say that I justified my decision to sit the exam a third time in 2015 based on the fact that I’d come even closer to the ultimate prize (Band 9), but, if I’m honest, I probably would have made the same decision regardless of the result. I have heard from many candidates who are preparing to undertake Level III for a third or even fourth time and I get their plight.

I get it because I’ve lived it.

The good news is that the third time was indeed a charm – I passed my CFA Level III in 2015. I’m not going to downplay the significance of this accomplishment: a CFA charter opens doors that are inaccessible without one. This is a society of professionals and it takes brains, dedication, and a monumental effort to be counted among our ranks. Being a CFA charterholder is far more than the ability to use three letters at the end of your name. My charter is proudly displayed on the wall of my home, where it serves as a continual reminder of the sacrifices that I made in order to overcome the numerous challenges and finally reach the summit.

And that is precisely the problem.

At least that is the problem in my case. Because, while I have finally achieved something that I wanted so badly and worked so hard to get, and while doing so has paid huge dividends professionally, I haven’t been able to recapture what I sacrificed to get here. For three years, from January to June, I made choices that prioritized my pursuit of a CFA charter and, by definition, gave a lower priority to other areas of my life.

To make a long story short, I sacrificed weekends with my children and now I see them every other weekend.

I chose the silence of an empty office and now I spend most week nights wishing I could be distracted by the cacophony of their noise.

When they leave a mess after spending a weekend with me, it serves as a haunting reminder of something that was there moments ago but is now gone.

Did the CFA cause my marriage to end? No. As in any such case, the contributing factors are many and various. Has my life become an unending parade of gloom and misery? No. Like anyone else, I have good days and bad days, but the universe has been remarkably kind to me overall.

If I were granted the opportunity to talk to the 2013 version of myself, I’m not sure what I would say. I’d obviously be tempted to give myself the solutions to the exam that I was about to write, but that would be a clear violation of CFAI Standard VII(A). Certainly my advice wouldn’t be to stop pursuing the CFA charter altogether because there are no simple solutions. Getting the CFA charter was important and I am glad that I got it. Everything I sacrificed to get that charter was also important and I am sad for what I have lost.

Perhaps the best thing I could do would be to encourage my younger self to keep everything in perspective – or at least make a better effort to do so. 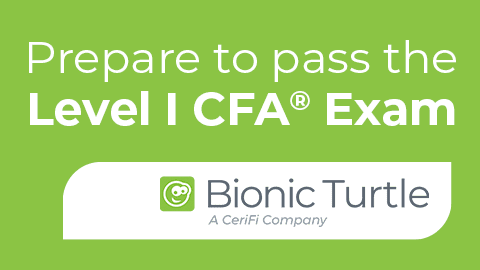